Joseph and Rebecca Hine may have had other children but there were only two enumerated in their household in both the 1850 and 1860 US Census Records—Lizzie, born in 1836, and Thomas, born in 1838. From one of Thomas’ letters, we know his birthday was 5 December 1838. From his handwriting, we can conclude that Thomas had a limited education. He often misspelled common words and his letters were a bit of a challenge to decipher. But there was clarity of thought and a touch of humor in most of what he wrote that make them quite enjoyable to read.

From service records we know that Thomas enlisted on 20 July 1861 in Co. D, 39th Ohio Volunteer Infantry (OVI).  He enlisted with many other of the young men from Mount Washington whose names can be found on the adjacent farms in his neighborhood—Mears, Stoms, and Whetstone, for example. The regiment was first sent into Missouri, then to Mississippi, and Tennessee. But their mettle was largely untested until they joined Sherman’s Army and marched on Atlanta where they played a pivotal role in several battles. It took part in the battle of Resaca, the action at Dallas, then moved to Acworth, thence to Big Shanty, pushing the Confederate army to the base of Kennesaw mountain, where the regiment remained under constant fire until the enemy abandoned his line and took position near the Chattahoochee river. Then the regiment engaged in a successful assault on the enemy’s works at Nickajack creek and on July 22 assisted in repelling the attack of Hardee’s corps on the left flank of the Army of the Tennessee. This was the most severe engagement in which the regiment participated during its term of service, losing one-third of its number in killed and wounded.

Though he promised his sister and mother he would not reenlist as a veteran after his first term of service, he did so and continued to serve until July 1865 when he mustered out at Louisville. After leaving the service, Thomas wrote that, “I have resided in Melrose Hills (Kentucky), Hamilton County (Ohio); and Dawson and Custer Counties (Nebraska)  and my occupation has been that of a farmer.  Prior to my entry into the service, …I was a man of good, sound physical health, being when enrolled a farmer.  That I am now entirely disabled from obtaining my subsistence by manual labor by reason of my disabilities [rheumatism and chronic diarrhea] above described and received in the service of the United States, I therefore make this declaration for the purpose of being placed on the invalid pension roll of the United States.” This was in 1891.

After Thomas’ death in 1897, his widow, Mary E. Hine (formerly a widow of William Aker), filed for a Widow’s Pension in the state of Nebraska. In the application she wrote: “I am the widow of Thomas Hine. I was married before—married my first husband William Aker on 3rd day of May 1858, witness Anna Talbot and Frank Fiester.  William Aker died 15th day of September 1861, persons present at his death were our neighbors.  My two aunts have tried the neighbors to find but can’t get no clue of them.  My two aunts are Dean.  No public record of my first marriage and my marriage certificate was lost by fire and two witnesses of my first marriage are gone, I don’t know where.  I have done all I could to find the witness of my first marriage and the proof of his death.”

That heretofore, to-wit” on the 4th day of October 1865, Thomas Hine obtained from the Clerk of the County Court, within and for the State and County aforesaid, a license to marry Mary E. Acker and that they were married by Charles L. Daubert at Louisville, on the 4th day of October, 1865 in the presence of Chris Gebhard and Bertha Gebhard all of which appears upon the Marriage Register on file in my office as Clerk of said Court.

IN TESTIMONY WHEREOF, and that the foregoing is truly and completely copied from the Register aforesaid, I hereunto set my hand and affix the Seal of said Court, of which I am the custodian, at Louisville, Kentucky, this 4th day of November 1897.

“Joseph Hine, a resident of this neighborhood for forty-six years, died very suddenly, supposed to be from congestion of the lungs, on the 29th ult., at the family residence on Salem avenue. Born in Lancaster, Pa., in 1809, he was sixty-nine years old, and appeared as strong and vigorous on the day preceding his death as a man of half that age. The funeral services, on Sunday, in the Salem M. E. Church, were conducted by the pastor, Rev. J. Vance; the sermon was very appropriate and impressive, and the church was filled to the utmost capacity by people from the entire vicinage. Mr. Hine was very highly esteemed for his sterling qualities as a true Christian gentleman. In his duties and official relations to the church, he was ever faithful and true, and as a good citizen always influential among his coadjutors. His memory will be cherished by very many who knew him, and the entire family has the heartfelt sympathy of our entire community.”  [Cincinnati Daily Gazette, 2 April 1878] 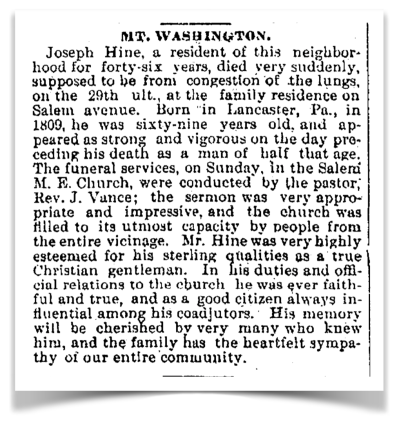 Some of Griff’s Other Blogs

Saving history one letter at a time.

Saving history one letter at a time

Saving History One Letter at a Time

by Charles A. Frey

The Civil War Letters of Will Dunn

The Letters of Rufus Melvin Graham, drummer for the 50th Mass. Vols.
The Civil War Letters of Benjamin Curtis Lincoln while serving in the 39th Massachusetts Volunteers
"Though distant lands between us be"

"Tell her to keep good heart"

The Origin of Bluemont Central College

"May Heaven Protect You"

Lt. Commander in the US Navy during the Civil War

Fighting with the Irish Brigade during the Peninsula Campaign

"Till this unholy rebellion is crushed"

"I Go With Good Courage"

"This is a dreadful war"

Saving History One Letter at a Time

The Diary of George W. Shue

No Cause to Blush

This is Indeed A Singular War